In the incomparable beauty of the Oberengadin in Grisons there's the village Sils-Maria between Lake Sils and Lake Sivaplana. Sils is not only attractive in terms of scenery and with lots of offers for leisure time and culture, it is also the starting point for one of the most beautiful, southern side-valleys of the Engadin, the Fex Valley.

The Fex was used by locals as a mountain pasture for sheep. The original name was „Fedes" like „Feda", what means sheep. It was first mentioned in records in 1303.
The valley consists of the places Fex Platta, Fex Vaüglia, Fex Crasta, Vals and Fex Curtins. Besides the private houses there are 2 hotels – one of them our „Sonne", 2 pensions and 4 farms, which produce  several good products like meat and cheese in a biological and nature loving way.

The Fex ends at Fex Glacier, which is surrounded by the peaks Piz Tremoggia, Piz Chapütschin, Piz Fora and Piz Güz and which make up the impressive scenery of the end of the valley.
Thanks to our great uncle, the visionary and then mayor Gian Fümm. The Fex Valley has been under strict conservation since 1954. Since then the public transport has been strictly limited, structural alterations and new buildings are hardly possible and the cables were layed underground! The horse-coaches have always been a popular means of transport into the valley and by now it is hard to imagine the Fex without them.
In Fex Crasta you find the picturesque chapel with its famous and well-preserved frescos from the 15th century. Right here, where the chapel was built, there is a „power place", that can have a calming and refreshing effect on humans.

In the year 1908 next to this power place and the chapel our great-grandmother, Verena Fümm-Nadig built the „Hotel Sonne". Already one year later it was opend for the first winter season!
Verena led the business until the 1930s and then passed it on to her son, the said Gian Fümm. His heart beat more for politics, though.

He was even represented in the „Grosser Rat" of the canton Grisons. He could neither enjoy his inn nor his achievements in politics, unfortunately, as he died still young in 1956. His wife, Clorinda Fümm- de Zanet had to take the sole responsibility for the „Sonne". Within the early 1970s the business was

leased for a short time before it then came back into the hands of the family in 1978 again. Clorinda Fümm took her niece, my mom Susanne Witschi-Fümm into the business together with her husband, my father Peter Witschi. Meanwhile the hotel had aged a bit, but with a lot of loving care for detail and with an excellent kitchen, the young couple offered many guests a beautiful holidayhome, entertained many people in the restaurant and organised glittering parties. Many specialities, for which the restaurant is still known today, took their course: the fine Röstis, the Engadiner nut gateau according to the original recipe of great-grandmother Verena or the well-known bilberry-cake.... 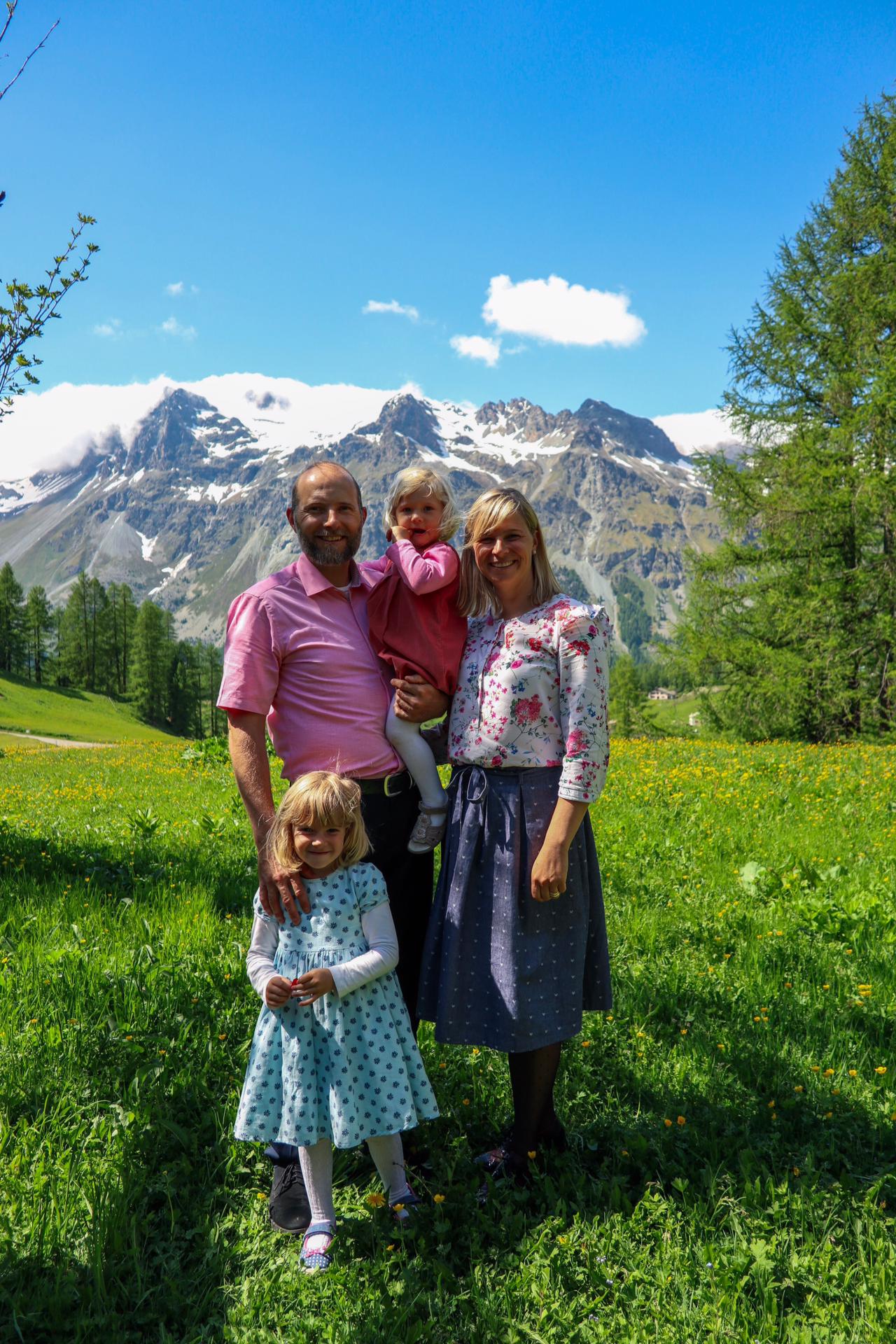 After graduating from High School in Samedan, I attended the school of hotel management in Lucerne. My brother served an apprenticeship in the Suvretta House and after having worked for others for many years, now manages the restaurant „Alpenrose" in Sils-Maria.
It won't escapes you that women have always been at the helm since the opening in the year 1908... but in the year 2012 a change took place in the tradition.

With me the 4th generation took over the management of the house. And in spring 2014 the wedding bells rang for me and my wife Jennifer from Germany.
Since June 2014 we have been managing the "Sonne Fex" together and with a lot of pride we look after our long familytradition.

Our daughter Siri is now 4 years old and since april 2017 her sister Sinja is with her. Both will welcome you with their smile!

We are looking forward to your visit and we send you our best wishes!